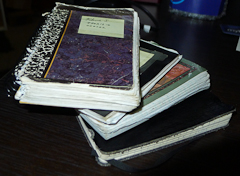 I love being out and discovering them.

It’s not like me, at least until the present, to make much of routines that end in standard forms, especially those titles: detail, object, city, state, month day, year.  However, I have to admit, the format keeps things poker-faced simple.

One thing reinforced: the importance of notes when trying to recall the basics about pictures a decade old.

Some of this week’s feed has come off a work perpetually in progress, Maryland Food Traditions, which I, as photographer, took up a long time ago as a six-month project (to be published by Johns Hopkins University Press) only to suffer it becoming a pokey six-year-long ordeal, not that I minded going out to shoot for a book: then as now, I just wanted the thing done, up there on the retail shelf, and producing some royalty.

The writer hung with the project a while longer — he who has the accompanying interview notes has been sent e-mail on all this — but it sure seems shelved these days, and not in the way intended.

Whatever it may be, I haven’t seen a frame of it for 14 years.

Mine really has been a pro-am indulgence and effort.

I had intended to shoot a few weddings to pay for it, and indeed still offer that service (also commercial, photojournalism, portraiture).

Even with film costs more or less a part of the past (I am keeping my Nikon FM3a, thank you) and great digital equipment at hand, the costs associated with computing (main box rebuilt like new!) and printer inks and papers have filled in for the annual cost-of-doing-business ouch (much less the cost of not doing business!).

Watch out for the heavy marketing (editorial / research / photography services) at Communicating Arts . . . .

This entry was posted in Journal. Bookmark the permalink.