Chillin’, And You Would Be Too at Minus Nine Celsius

Very cool news: the studio brought in a little bit of web work, and I’m going to munch through those hours in just a little bit.

In the preceding post, you saw Dean’s picture of me taking a picture (now that we’re all in self-reflexive post-modern pop modern media mode).  It would be most unfair, of course, if I kept the tosser from digital memory from you:

It’s looking like the “mallet finger” (happened about five weeks ago) will be crooked for the rest of my life, as I’ve traded off splinting for a stiff sport’s tape wrap that hasn’t proven stiff enough.

I’m hoping for a hang of about seven degrees (off straight) rather than 37 degrees of horse-headed fingertip, and this week there may be enough renewed tendon there to do that.

I’m going to find out definitively in two days.

The Lumix may be handled with one hand, although with tape on the right hand’s long finger as opposed to a metal splint, I didn’t have to go quite that far on the latest snap shots.

Of course, when I lift the camera, it looks like I’m giving the finger to everyone off the starboard bow.

If you have been following blog, you have probably figured out that I can do a lot with a little even though I’d much rather be doing a lot with a lot.

Today’s excuse: it’s yet a bit cold out there for excursion — 15-deg.F. this morning and 11-deg.F. predicted overnight.

I think I will just stay in and rebuild my computer (the 2007 home-built XP box needs it).

I never really tire of these moon in the branches shots.

There was a day — frankly, that would be the film days — when the cost in materials, processing, and time may have wanted more direct purpose for the effort, however compulsive.

Now, for the moment, for the health an old man may associate with walking, a part of my routine has come down to the one-handed camera point, shoot, edit, and blog.

Fairest of the fair in recent snap shots. 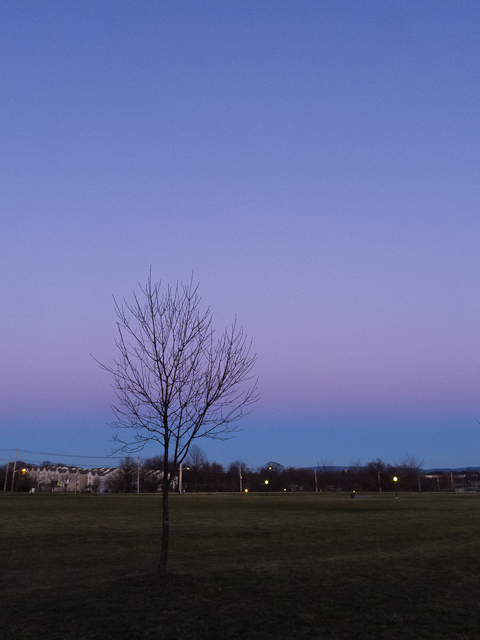